What Gemstones to wear this Autumn/Winter 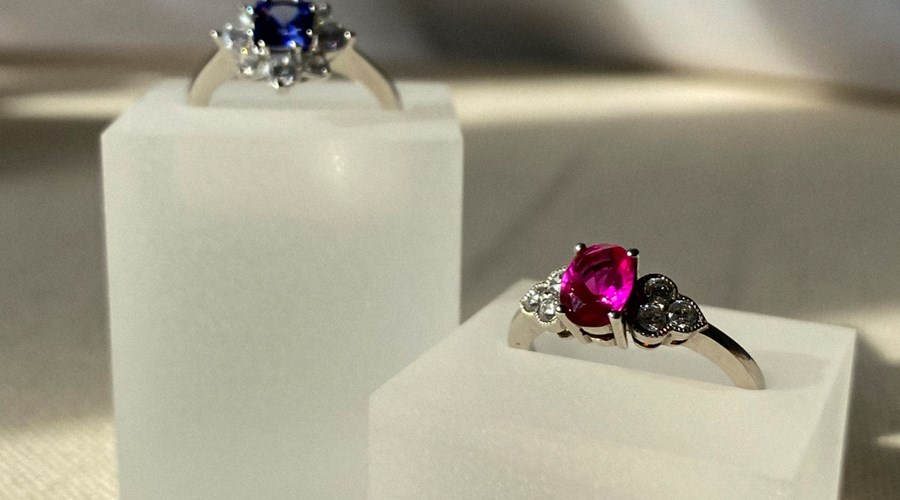 It’s already Autumn, meaning Winter is right around the corner. We’re not quite sure where the time has gone but one thing we want to know is: what gemstones should we be wearing this time of year?

Well any… but, here are a few we think are going to be trendy this Autumn/Winter and why you should be wearing them!

Garnets are the January birthstone, so already we know it’s a Winter stone; it’s also the stone that celebrates 2 years of marriage. They’re a fiery crystal of passion, representing love and strength.

Most commonly known for being red, other Garnet colours involve pink, orange, green, deep brown and purple-red. Though deep red, orange and purple garnets are what we’re feeling at this time of year.

The good thing about garnets is they’re relatively affordable, so whatever the budget they can be worn! Here’s a Diamond and Garnet Ring we have available on our Etsy.

The September birthstone - Sapphire - exists in a range of colours including blue, pink, green, yellow, orange, purple, colourless and black.

This stone is used to protect against negative energies, calm the mind and strengthen intuition. Sapphires also have a connection to romance: which is why they’re often used in engagement rings!

Dark blue Sapphires are the perfect accessory this Autumn/Winter. Here’s a Blue Sapphire and Diamond Ring we have available on our Etsy.

A breathtaking gemstone that somewhat resembles the northern lights, proving to be the ultimate stone to wear during the Winter.

Some stones exhibit a range of colours due to a ‘Schiller Effect', which is a strong play of iridescent blue, green, red, orange and yellow colours. This phenomenon is so well known it’s been named Labradorescence - making this stone unique and definitely stand out.

Many labradorite gemstones don’t actually exhibit labradorescence, though they can still be stunning because of their colour or other effects like aventurescence.

It’s known to be a stone of transformation: a useful companion through change. It banishes fears and insecurities and strengthens faith in the self and trust in the universe.

One of the birthstones of October: you can find Tourmaline in almost every colour of the rainbow, making it a versatile stone especially for this time of year.

Black is its most popular colour, which is perfect around Halloween - an added bonus is it will go with nearly every outfit! It’s also available in reds, oranges and yellows (which are all very Autumnal and Wintery shades).

You can also get Tourmalines that are ‘particoloured meaning there are two or more colours to a single gem, certain colour combinations would be gorgeous this time of year e.g red to green, yellow to red, black to red, the possibilities are endless.

Tourmaline is a powerful stone for those who want protection, it also promotes spirituality and wisdom.

Opals are the official birthstone for October, they come in warm colours of yellow to orange to red: making Fire Opals the perfect Autumn/Winter accessory.

Fire opals are worn to help boost self-confidence in those who are shy as well as encourage positivity and health in romantic relationships. They’re also a representative of good fortune and success.

This particular stone is pretty rare: making them more valuable.

We all knew this was going to be here because diamonds are perfect for every occasion meaning they’re also perfect to wear all year round - especially in Winter.

Although in certain places the sun isn’t out as much, the sparkles are still as beautiful as ever and they especially resemble that fresh crunchy snow in the mornings.

Diamonds are associated with strength, love and health.

And though we might be biased, we think they’re pretty cool.

Learn more about our Bespoke services.