Congratulations to Princess Eugenie and Jack Brooksbank on their Wedding!

Even with the wind and mist, the weather could not put a downer on what was a perfect Wedding for Princess Eugenie, and her now husband Jack Brooksbank.

Friday was dedicated to the second Royal Wedding of the year, bringing a similar feel, as it was held at the same location as the Duke and Duchess of Sussex’s Wedding.

Whilst the public gathered around the castle and awaited the arrival of the Royals, we couldn’t help but notice the celebrities that began filling up the chapel seats.

Below we’ve listed some of the most notable figures! 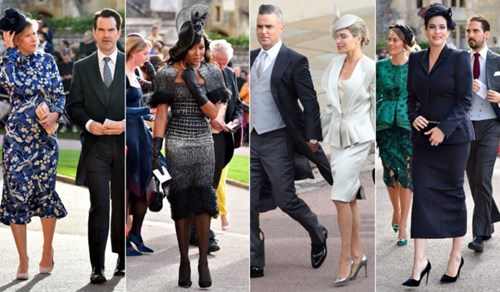 Newly wed cousins of Princess Eugenie, Harry and Meghan, arrived with The Duke and Duchess of Cambridge, to take their seats in the Royal section.

Many of Eugenie’s other cousins also arrived, as well as her Uncle’s and Aunts, The Duke of Wessex, Prince Charles, and Princess Anne. 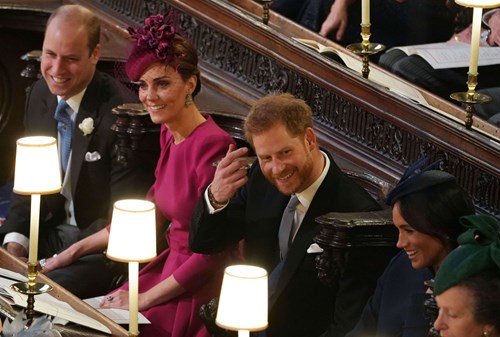 Jack Brooksbank and his brother were next to arrive, arriving by car, and only walking the distance of the steps into the Chapel.

Sarah Ferguson and Maid of Honour Princess Beatrice were next to arrive. Princes Beatrice wore a Royal Blue dress, by Ralph and Russo; whilst Fergie opted for an Emerald Green dress. 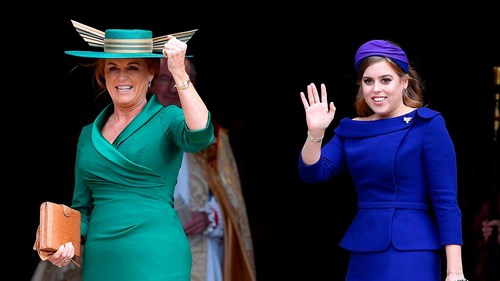 All the children wore cream outfits, with autumnal green accents. The Sashes worn by the Bridal party, were recreations of a famous art piece displayed in the Chapel, conveying Eugenie's love of Art. 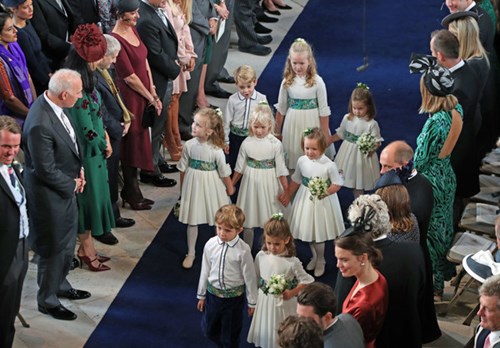 As Royal tradition goes, the Queen is always the last Royal family member to arrive, and she looked glowing in her Duck Egg Blue Dress.

With there having been speculation over whether Prince Philip would attend the ceremony, as his well known feud with Sarah Ferguson still seems unsettled, it was a pleasure to see him take the side of his Queen on this day.

With the wind picking up, speculation on whether a Veil would be accompanying the Bride was circling.

Yet the time came for Eugenie to arrive, as we saw her make her way up to the Chapel steps with her Father Prince Andrew. 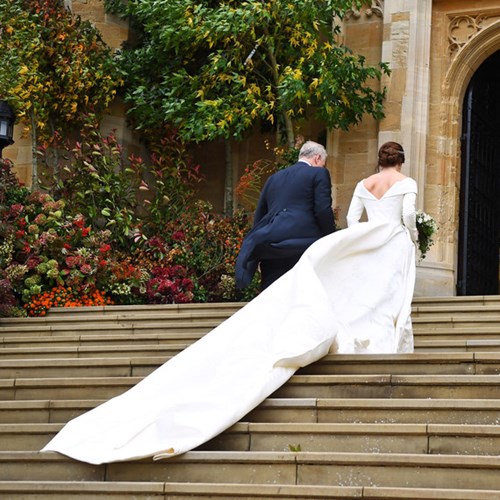 Looking stunning in her White backless dress, it boasted a slight V neckline with an off the shoulder finish. With detailing on the fabric, the Princess opted for no Veil. 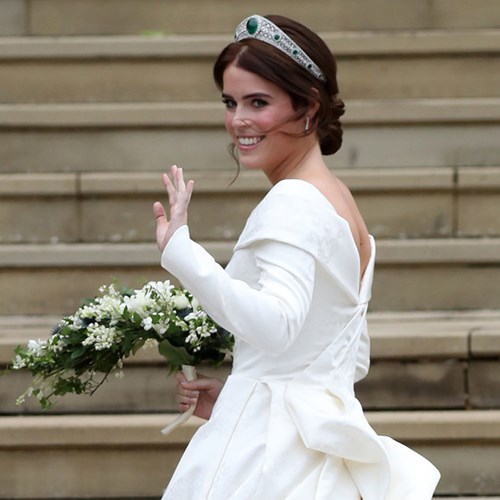 Her hair was up and adorned with one of the Queen’s Tiaras from her personal collection, the Greville Emerald Kokoshnik tiara, which is set with Emeralds and Diamonds.

To accompany the Tiara, Eugenie wore Diamond Drop Emerald Earrings, and a bare neck for emphasis on the dress. 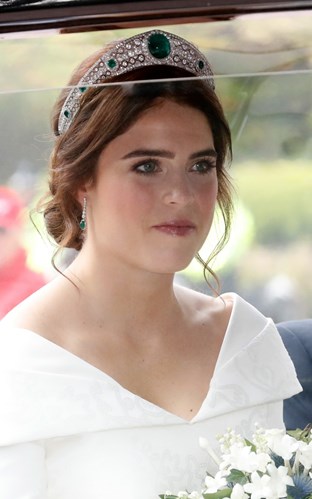 Peter Pilotto was the designer for the Dress, creating the long sleeved number with a fabric made specifically for Eugenie. 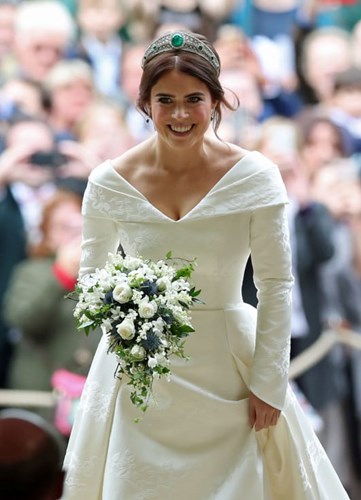 Prince Andrew, third child of the Queen and Prince Phillip, proudly walked his second daughter down the aisle for the first ever time. 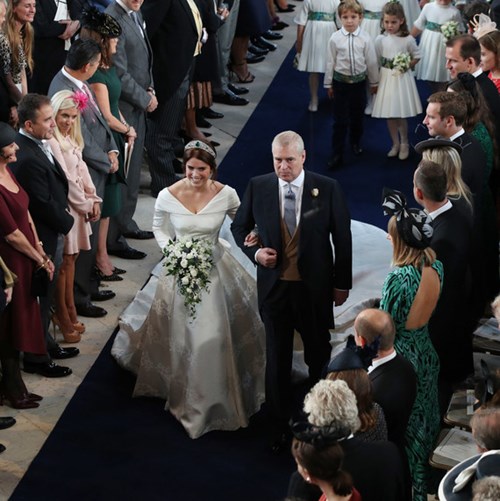 Passages were read by Charles Brooksbank and Princess Beatrice, as well as songs performed by Andrea Bocelli.

Princess Beatrice read a passage from F.Scott Fitzgerald’s ‘The Great Gatsby’. It later was revealed that the passage had reminded Eugenie of Jack, which is why it was chosen for the ceremony.

Once the ceremony had come to an end, Princess Eugenie and Jack joined on the steps for that famous first Kiss. 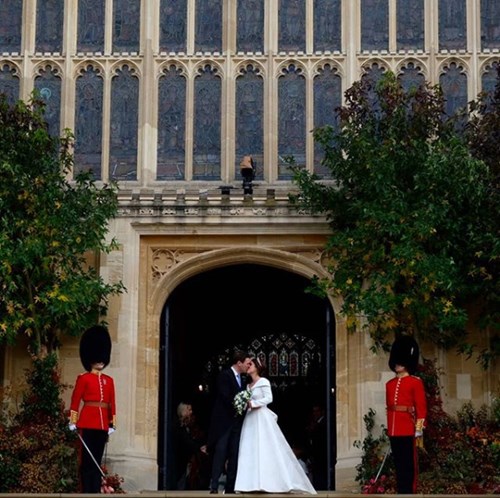 Afterwards they entered the Scottish State Carriage, and began their small procession around the Castle grounds.

We couldn’t be more thrilled for the happy couple, and what a perfect day it was for them!

Congratulations to Eugenie and Jack, as they start their new adventure together as Husband and Wife! 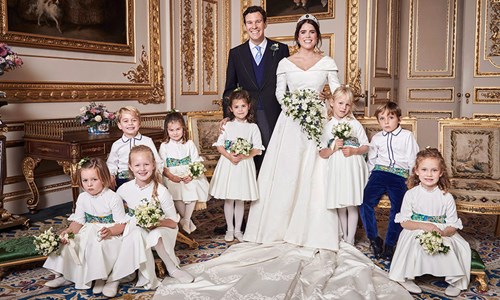 Choose Emeralds like Eugenie, with a pair of bespoke Diamond Emerald Drop earrings, like these ones here. 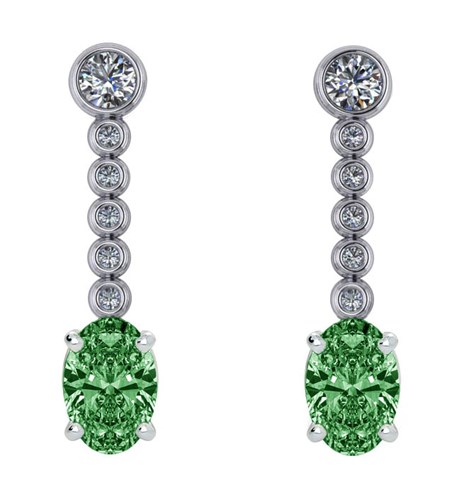 Quality Diamonds does not own or hold any copyright for the images used in this blog.